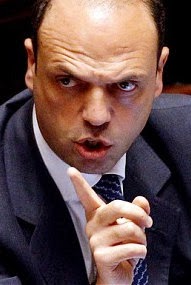 Via the Times Of Malta:

Il Tempo reports Italian Deputy Premier and Interior Minister Angelino Alfano [PHOTO]  has said the new centre-right party he leads would leave the government if the centre-left Democratic Party proposes legalising gay marriage in a government pact. Premier Enrico Letta, of the PD, started talks on Tuesday with the parties supporting his left-right coalition government on a policy pact for this year. The head of the PD, Florence Mayor Matteo Renzi, has proposed making the legal recognition of civil partnerships – including same-sex unions – part of the pact.

He [Alfano] said: “If they propose gay marriage, we’ll bolt for the door, denouncing the move before the public.” Alfano’s party are currently debating policy for 2014. Matteo Lenzi, Mayor of Florence and secretary of the Democratic party, put civil partnerships on the policy agenda following his election to leadership of the party last month.