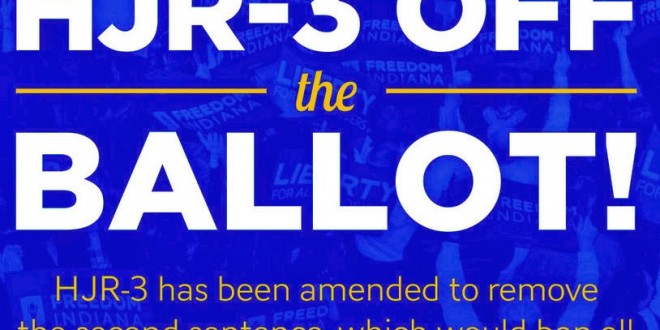 On Monday evening, the Indiana Republican-controlled House amended the language to House Joint Resolution 3 with a 52-43 vote, which will likely preven the state from sending a constitutional ban on same-sex marriage to the ballot in 2014. The change struck the second sentence of the amendment, which would have banned recognition of any legal status for same-sex couples that is “identical or substantially similar” to marriage. Many felt this intruded too much on benefits for same-sex couples, which are vital to ensuring businesses and universities in the state can competitively hire.

If HJR 3 passes the legislature its new form, it cannot be sent to voters this year. Amendments to the Indiana State Constitution must pass in the same exact form in two consecutive legislative sessions before being sent to the ballot. HJR 3 was first passed in 2011, but it now becomes a new amendment, which — presuming the new form passes the House and then the Senate — must itself be approved in a second legislative session, meaning the earliest voters would see it on the ballot is probably 2016. By then, the U.S. Supreme Court may well have ruled on one of the other state cases, such as those that have already advanced in Nevada, Utah, and Oklahoma, and the amendment could be moot.

Bolding above is mine. Freedom Indiana reacts:

Today’s vote bolsters the case supporters like you have helped us make all along: HJR-3 is a flawed bill and it has dangerous consequences for thousands of Hoosier families. The second sentence of HJR-3 would have far-reaching ramifications for gay and lesbian Hoosiers who just want to protect their families. Because HJR-3 was amended, even if the Senate approves this version of the bill, HJR-3 would still have to pass in the 2016 legislative session before reaching the ballot. We are incredibly grateful to members of the House — Democrats and Republicans — who did the right thing today by striking down this deeply-flawed and harmful clause. But we haven’t won yet. HJR-3 is still alive, and in order to ensure that it stays off the ballot — or at the very least, that the second sentence stays removed — we have to work harder than ever in the Senate, starting right now.

Today’s vote to remove some of the extremist language in the proposed constitutional ban on marriage in Indiana is a welcome step back from the brink. This offers the possibility that Indiana’s families will not be subjected to a harsh campaign and offensive ballot-measure that would add cruel and unconstitutional language to Indiana’s state constitution. The support that we saw today from Indiana legislators—including Republicans—and the success in achieving this vote reflected the growing momentum for the freedom to marry the person you love, and a repudiation of the effort to strip gay Hoosiers and their families of all legal protection and respect. “While the amended bill represents an improvement on what the Speaker tried to railroad through, even by changing committees and twisting arms, it still is a deeply flawed and unconstitutional measure that merits defeat. So there is much more to do. Freedom to Marry will continue working alongside Freedom Indiana and our coalition partners through the end of this legislative session to try to persuade lawmakers to listen to the voices of families, business leaders, and others who want to see Indiana on the right side of history.”

And here NOM spent ALL day flogging the bill. Heh.

Previous Rush Limbaugh Has The Grammy Sadz
Next Pixies – Magdalena