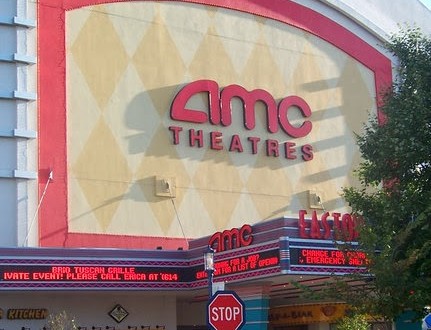 AMC Theatres has banned patrons from wearing Google Glass after Homeland Security yanked a patron wearing the device out of one of their Ohio multiplexes. Via the Guardian:

Writing anonymously on The Gadgeteer blog, the man explained that halfway into the screening at an AMC in Columbus, Ohio, he was hauled out by police and officers from homeland security’s ICE unit, which monitors piracy. “A guy comes near my seat, shoves a badge that had some sort of a shield on it, yanks the Google Glass off my face and says ‘Follow me outside immediately’,” said the man, who was taken into a room for interrogation. His Glass had been switched off during the movie, and he was wearing it for its prescription lenses. “After a long time somebody came with a laptop and an USB cable at which point he told me it was my last chance to come clean. I repeated for the hundredth time there is nothing to come clean about and this is a big misunderstanding so the [ICE officer] finally connected my Glass to the computer, downloaded all my personal photos and started going though them one by one … Then they went through my phone, and five minutes later they concluded I had done nothing wrong.” He wasn’t apologised to, but was offered four free movie passes, which “infuriated” him.

AMC says they are “very concerned” about the potential for stealing movies via Google Glass. The Motion Picture Association of America disagrees: “Google Glass is an incredible innovation in the mobile sphere, and we have seen no proof that it is currently a significant threat that could result in content theft.” (Tipped by JMG reader Kevin)

RELATED: As I mentioned here recently, I ran Miami-area theaters for AMC back in the stone age of VHS when movie pirates would occasionally bribe employees to smuggle new releases out of the projection booth for overnight duplication. It was quite the operation back in those days as the films arrived on six to ten small reels in two 50-lb canisters. Pirates, with the aid of an employee, had to break the film back down onto the small reels, take it elsewhere, splice it back together, then film it off their own screen. A couple of days later the tapes would appear at shops across South America. More often, however, they would just slip into one of our early matinees and make a shitty handheld recording off our own screen, a la Seinfeld. We threw them out all the time, but the local cops weren’t very interested in making arrests.