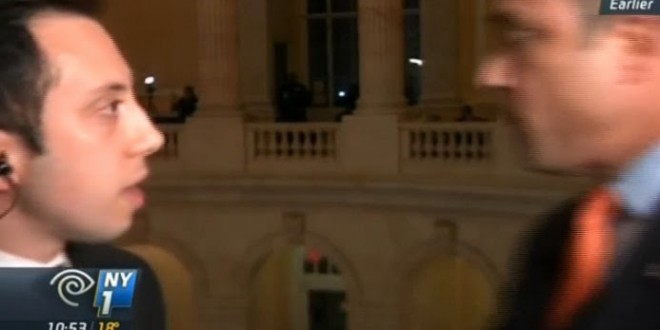 GOP Rep. Michael Grimm (NY) Threatens Reporter: I Could Break You In Half

Earlier today Rep. Michael Grimm (R-NY made positive news when he became the sixth Republican member of the House to co-sponsor ENDA. Grimm’s move won him accolades from openly gay Rep. Jared Polis (D-CO), the bill’s author. But tonight Grimm dominated the post-SOTU Twitterverse for threatening to assault a NY1 reporter who dared to ask him about his burgeoning campaign finance scandal back home, which so far has resulted in the arrest of one of his fundraisers.

Congressman Michael Grimm threatened Michael Scotto, a reporter with NY1, a local New York television news station, after the State of the Union Tuesday night saying “you’re not a man. I could break you in half.” Scotto, was finishing an interview with Staten Island Republican Michael Grimm about the State of the Union when he decided to ask one more question. What that question was is unclear because Grimm immediately cut him off saying “I’m not speaking about anything that is off-topic. This is only about the President’s speech.” The reporter then spoke to the camera saying that he hoped to ask Grimm about the ongoing campaign finance investigation around his 2010 campaign. Grimm has been linked to an allegedly corrupt Israeli rabbi and his ex-girlfriend has been indicted on charges of being a straw donor among other controversies.

According to a NY1 producer, Grimm also said this: “Let me be clear to you, you ever do that to me again – I’ll throw you off this fucking balcony.” The poor kid looks really startled.

UPDATE: Grimm is not apologizing.