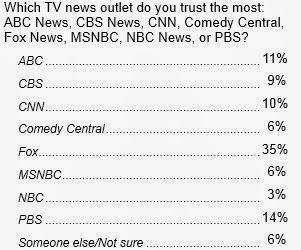 In a Public Policy Polling survey released today, Fox News tops the list of the most AND least trusted news networks.

35% of Americans say they trust Fox News more than any other TV news outlet, followed by 14% for PBS, 11% for ABC, 10% for CNN, 9% for CBS, 6% each for Comedy Central and MSNBC, and 3% for NBC. It leads the way because of its continuing near total support among Republicans as the place to go for news- 69% of Republicans say it’s their most trusted source with nothing else polling above 7%.

Meanwhile Democrats are split between a lot of different outlets when it comes to who they have the most faith in- PBS at 21%, CNN and ABC at 18%, and CBS and MSNBC at 12% all poll in double digits. It’s interesting that while Fox News and MSNBC are often thought of as equivalent, Fox News is by far and away the most trusted source of GOP voters while MSNBC is only tied for 4th among Democrats.

Fox News also leads the ‘least trusted’ list in our annual poll. 33% give it that designation to 19% for MSNBC, 14% for Comedy Central, 11% for CNN, 5% for ABC, 4% for CBS, and 2% each for NBC and PBS. That’s largely because 57% of Democrats give it their least trusted designation, with only Comedy Central at 18% also hitting double digits with them. MSNBC leads the way among Republicans at 38%, but CNN at 17% and Comedy Central at 13% both hit double digits as well. It’s interesting to note that Republicans seem to hate MSNBC more than Democrats like it.

Breakout details of the survey are here.

Previous NEW YORK CITY: Queer Nation To Protest At Russian Consulate On February 6th
Next Headline Of The Day