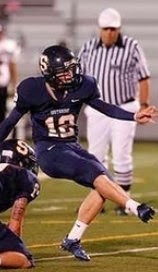 Williamette kicker Conner Mertens has become the first active college football play to come out publicly, telling  his coach: “I’m bisexual. I like dudes. I have a boyfriend. And next week, I’m going to tell the world.” Via Outsports:

Mertens didn’t easily arrive at his decision to come out to his coach or team, let alone publicly. No college football player in the United States at any level has ever come out publicly while still playing. Some have come out to their team, many have come out to friends, but none have said publicly that they are LGBT. Mertens doesn’t want any other youth in his hometown to ever feel the way he did, so he took matters into his own hands. Last night he tweeted a lengthy letter to his hometown in hopes of changing hearts and minds and giving local LGBT youth someone they can point to with pride: “You are not alone. You do not need to come out but you do need to know that you do not have to go at this by yourself. The aloneness you’re feeling is temporary and it will get better. This place is changing…changing for the better. I made the decision that if I could prevent one person from feeling that self-hatred, loneliness, desperation and a thousand other emotions that I felt, I would. I will be damned if I let anyone tell you that you are wrong or weird or not normal. Love yourself and allow others to love you. Be who you are and know you’re not alone.”

Hit the link for the full story and to read Mertens’ letter. The story has already been picked up by Buzzfeed, ESPN and Yahoo Sports.

RELATED: Openly gay Pennsylvania state Rep. Brian Sims came out to his college football team in 2000 while he was their captain.