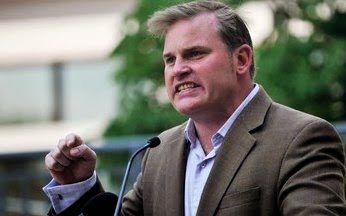 Jeremy Hooper reports that hate group leader Brian Brown, who already spreads his evil bigotry into foreign countries, has joined the board of directors of the international anti-gay coalition, CitizenGO.

CitizenGO, which is based in Madrid (where Brian recently delivered a speech), is essentially a petitioning platform focused on global issues. In addition to considerable focus on marriage inequality, CitizenGO also promotes and/or directs campaigns in support of speakers who claim that “homosexual activists have played a integral role in the rise of Fascist politics, including Nazism,” against the World Health Organization’s supposed “promotion” of homosexuality, against Canadian pride parades, and much more. CitizenGO even hosts a petition in support of radical international figure Scott Lively—one that describes homosexuality as “morally wrong and harmful to individuals and society.” It’s clear what kind of world CitizenGo is trying to create. It is now all attached to Brian Brown and to NOM. But wait, there’s more. It turns out that Brian is not just on the board of CitizenGO. Instead, it appears that the organization Brian runs in tandem with NOM, the conservative rallying platform called ActRight, has absorbed CitizenGO as its own. The CitizenGo logo now reads, “CitizenGo: Member of the ActRight Family.”

Here is the CitizenGO petition backing the Massachusetts gubernatorial campaign of Lively, who is presently on trial for crimes against humanity. CitizenGO has also endorsed Russia’s law against “gay propaganda.” As we’ve said for years, exporting his hatred is the only card Brown has left to play.