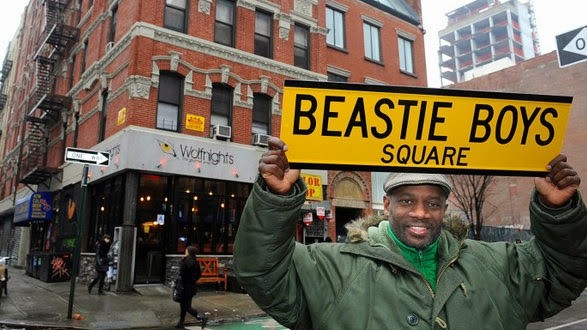 Public opposition to the renaming of landmarks and streets for dead famous people became rather strong after the controversial renaming of the Queensborough Bridge for late NYC Mayor Ed Koch. So it will be interesting to see how the City Council handles this one, especially since two of the Beastie Boys are living.

This Tuesday evening, a community board in lower Manhattan will vote on whether or not the corner of Rivington and Ludlow Street in the Lower East Side will be renamed “Beastie Boys Square.” The location would pay homage to the iconic rap trio’s second album Paul’s Boutique. (Rivington and Ludlow is the intersection shown on the Paul’s Boutique album cover.) The move comes as a result of Beastie’s superfan LeRoy McCarthy, who last fall set up an online petition and Facebook page to get the street’s name changed. The first step is to get the measure passed by the Community Board, followed by the City Council.

RELATED: Not far from the proposed Beastie Boys Square is Joey Ramone Place, which was the most stolen street sign in town until the city finally put it 20 feet above the curb.