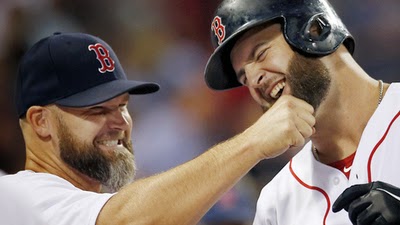 Procter & Gamble says a growing preference for shaggy styles is trimming razor sales. Beards are showing up all over, from the facial hair favored by Brooklyn hipsters to the solidarity beards sported by the Boston Red Sox baseball team, which in 2013 went from last place in their division to World Series champions. P&G even called out Movember, when participants grow mustaches to raise money for prostate cancer research. The event cut into grooming sales last quarter, Chief Financial Officer Jon Moeller said yesterday on an earnings call. P&G’s grooming business, which includes shaving cream, razor blades and deodorant, generated $2.12 billion in revenue during the quarter ended Dec. 31 and accounted for 9.5 percent of the company’s sales. Guys are hearkening back to a more “rugged, masculine” look, said David Wu, an analyst at Telsey Advisory Group in New York. Facial hair is becoming more accepted in the workplace, he said, in industries ranging from fashion to finance. While Wu is clean-shaven, he says most of his male friends sport facial hair. Alex Mecum, a real-estate salesman in downtown Manhattan, wears “permastubble” that he maintains with a trimmer. Most of the fashion-conscious men he knows have some growth.

And how long have beards been popular with many gay men? Fifteen years? Twenty? Anyway, you still need razors to keep a beard in good shape. (Tipped by JMG reader Glenn)