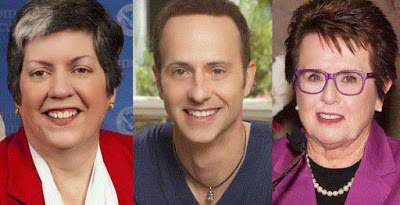 The Opening Ceremony of the 2014 Olympic Winter Games in Sochi, Russian Federation will be held on February 7, 2014. The delegation will attend athletic events, meet with U.S. athletes, and attend the Opening Ceremony. The Honorable Janet A. Napolitano, President of the University of California, will lead the delegation. The Honorable Michael A. McFaul, United States Ambassador to the Russian Federation. The Honorable Robert L. Nabors, Assistant to the President and Deputy Chief of Staff for Policy. The Honorable Billie Jean King, Member of the President’s Council on Fitness, Sports and Nutrition, Member of the International Tennis Hall of Fame, and recipient of the Presidential Medal of Freedom. Mr. Brian A. Boitano, Olympic gold medalist, figure skating.

Neither of the Obamas, no Joe Biden, but a trio of gays. That’s a message. Of course, neither Napolitano nor Boitano have actually come out. There will be lots of reading of the tea leaves for the next few days.

UPDATE: Via the Associated Press.

The Human Rights Campaign, one of the groups that wrote the White House last month asking Obama to include gays and lesbians in the delegation, applauded the unveiling of the delegation Tuesday. “It’s a positive sign to see openly gay representatives in the delegation,” said spokesman Michael Cole-Schwartz. “Hopefully it sends a message to the Russian people and the rest of the world that the United States values the civil and human rights of LGBT people.” On other fronts, the 2014 delegation appears to be a step back from previous years, when the U.S. sent top-level administration officials to represent the U.S. at the Olympic ceremonies. First lady Michelle Obama led the delegation to the London Games in 2012, while Vice President Joe Biden headed the effort in 2010 in Vancouver. Obama’s schedule will not permit him to attend the games in Sochi in February, the White House said.