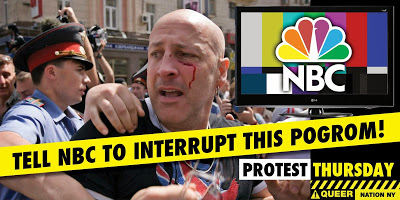 Queer Nation will today crash the holiday party for NBC staffers at a hotel in downtown New York City. They write:

This is the not at all inspiring tale of the International Olympic Committee and eleven of the top Olympic sponsors’ Road to Sochi. This coalition of some of the biggest mega-corporations on Earth dutifully and unfortunately followed the lead of feckless IOC president Thomas Bach. They have made a collective agreement that the shining ideals of the Olympic charter are merely easily expendable platitudes if they ever threaten to interfere with the collecting of large wheel barrels full of Olympic profits. The result of the IOC and sponsors’ inaction is the Olympic charters’ hollow assurances of non-discrimination and respect for basic human rights have now been reduced to mere jive talk and many in the global LGBTQ community are not at all fooled by it.

Previous Brooklyn Borough President: My Borough Is The Lesbian Capital Of The Northeast
Next Open Thread Thursday