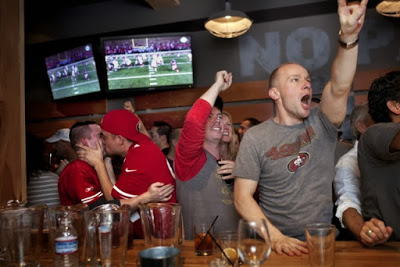 Deadspin has named the above as their favorite sports photo of 2013.

In January, photographer Deanne Fitzmaurice was on assignment for Sports Illustrated when she went to a San Francisco gay bar, HiTops, during the 49ers-Falcons NFC Championship game. She was assigned to get a photo that would accompany a story about the diversity of 49ers fans. Her photo, above, was a dream shot: Two guys making out, just as the 49ers took a fourth-quarter lead.

It was a random smooch and the photographer later learned that the two men were not a couple. (Tipped by JMG reader Helen)