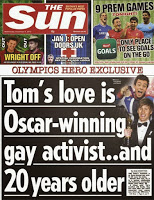 A friend of the sportsman allegedly told The Sun: “He’s besotted with Dustin. They love each other and aren’t concerned what anyone says about age difference.” “Dustin is very proud of Tom for making such a powerful statement about his sexuality. “They are officially in a long term relationship and are talking about having a future together.” According to tabloid reports, the pair were introduced at the Soho hotel in London this summer. Daley has apparently been flying between London and Los Angeles ever since. Black won an Academy Award for Best Original Screenplay for Milk, the 2008 biopic on California’s first openly gay elected official, Harvey Milk.