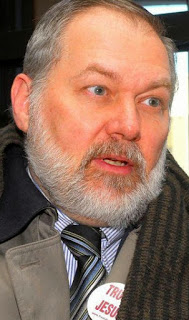 Earlier this year we learned that Scott Lively, who is arguably the most evil of all the American anti-gay crackpots, was planning to run for governor of Massachusetts.  Yesterday MassLive reported that Lively’s campaign has been launched.

His campaign motto is “Qualified. Experienced. Electable.” Publicly available campaign finance records show he has about $3,000 in his coffers, including a $2,000 loan to himself. Lively said he does not believe being the target of a 2012 lawsuit in federal court leveled by Sexual Minorities Uganda in connection with his anti-homosexuality campaign in that country will hurt his chances as a candidate. “If anything, I think it will help me when people learn how ridiculous the lawsuit is,” he said during an interview. Lively is running as an independent in the “bluest of the blue states,” he said. He said he will be a viable option for conservatives whom, he said, have been abandoned by Republicans and have no connection with Democrats, to whom he refers as “Communists.” “The people of Massachusetts need a candidate who can clearly and unapologetically articulate Biblical values without fear or compromise,” his campaign literature states. “They need a candidate who will tell the simple truth that abortion is murder, and homosexuality is condemned by God (but that Jesus forgives those who repent).”