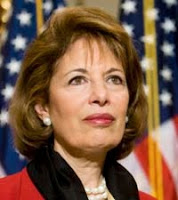 Rep. Jackie Speier (D-CA) today reintroduced a House resolution that denounces the use of “ex-gay” torture on LGBT youth. Speier introduced the same resolution in November 2012, but it was not allowed to come to a floor vote. Lambda Legal reacts to today’s action via press release:

We applaud the introduction of this important resolution, which adds the voice of the U.S. Congress to the growing chorus opposing attempts to change a young person’s sexual orientation or gender identity. So-called ‘reparative therapies’ fail any credible scientific or therapeutic test, and serve only to traumatize those most vulnerable – our youth. From community centers to therapists’ organizations to crisis hotlines, many have witnessed first-hand the casualties of baseless promises in the guise of ‘therapy’ to change sexual orientation and gender identity. Lambda Legal has argued in the courts about the trauma of this so-called ex-gay therapy and the trail of fractured lives and ruptured families left in its wake.

Truth Wins Out has also responded:

The pushers and peddlers of guilt and shame known as ‘reparative’ therapists’ pretend to be experts, when in reality they are simply extremists and ideologues taking advantage of desperate and vulnerable people. Since every mainstream medical and mental health association in America rejects so-called reparative therapy, this resolution is a no-brainer. Either you support America’s kids or you support quack doctors with an extremist religious agenda.