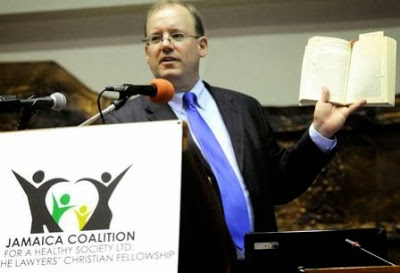 Peter LaBarbera, president of the Americans For Truth About Homosexuality (AFTAH), in the United States of America (US), has encouraged Jamaicans to be grounded in their Christian beliefs and not to be lured by other countries in repealing the buggery law. “The United States has no business lecturing anybody about sexual morality. America has rampant abortions, rampant promiscuity, and I stand wholeheartedly with Jamaicans and encourage you all to hold to your beliefs, ” LaBarbera told The Gleaner. LaBarbera made the comments Saturday following The Jamaica Coalition for a Healthy Society International Human Rights conference at the Jamaica Conference Centre in downtown Kingston. “We are all watching Jamaica to see what happens (buggery law), and I believe if Jamaica can stand up and not bow to the pressure, you can be an example to the world. There is no need to follow anybody,” LaBarbera said.

Per Jamaican law, homosexual male acts (but not female acts) are punishable by ten years in prison. LGBT people there are regularly murdered, often by angry mobs incited by local evangelicals.