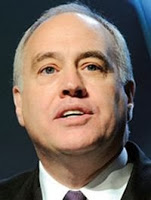 New York state Comptroller Thomas DiNapoli has signed onto a letter which demands that sponsors of the Sochi Olympics issue a denouncement of Russia’s anti-gay pogrom. Andy Humm reports at Gay City News:

Ten major Olympic sponsors from Coke to Dow Chemical –– none of which has acceded to calls that they speak out forcefully against Russia’s laws making it a crime to be gay in public –– are now being pressured by the $161 billion New York State Common Retirement Fund, led by Comptroller Thomas DiNapoli, to do that and more. New York City Comptroller John Liu and 19 private investment firms also signed the December 3 letter, which has yet to yield a response from the sponsors of the Olympics scheduled for February in Sochi, Russia. “The Russian government’s discriminatory laws have cast a shadow over the Olympics,” DiNapoli said in a December 5 release calling on the sponsors to “stand up for the respect and equality enshrined in the Olympic movement, advocate for human rights, and confront abuses.”

DiNapoli is under pressure from gay politicians, including state Assemblyman Daniel O’Donnell and state Sen. Brad Hoylman, who have called on him to divest New York state of all Russian interests.  Read the full letter to Sochi’s sponsors.