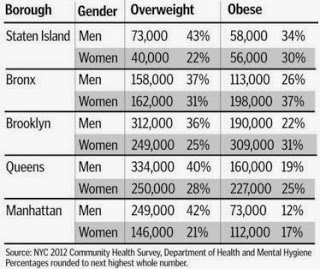 From a survey released last week by the city, we see what some argue is the primary benefit of living without a car.

Staten Island shares top place in the citywide obesity record with the Bronx. The percent is lower in Brooklyn, where 27 percent of the population was reported as obese, followed by Queens, with 22 percent. The smallest percent of obese residents lived in Manhattan, arguably the city’s most walking-active borough. There, slightly under 15 percent of the population tipped the scales over the obesity mark, according to the survey. More Staten Island men are obese (34 percent, or 58,000 people), compared to women (30 percent, or 56,000), the Health Department reported. Staten Island Borough president-elect James Oddo called the statistics “brutal,” adding that the numbers “verify what I see with my own eyes.”

Despite the various campaigns of the Bloomberg administration, the overall obesity rate in NYC has climbed 25% since he took office in 2002.