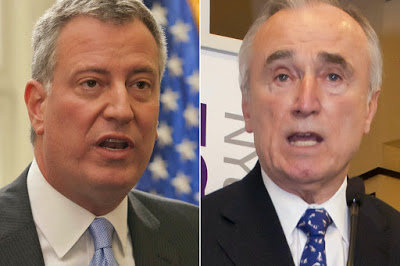 New York City Mayor-Elect Bill De Blasio has named Bill Bratton as NYPD Commissioner. Bratton served under Rudy Giuliani for three years in the mid-90s and most recently spent seven years as the police chief for Los Angeles. This is a controversial selection for De Blasio, who campaigned heavily against the stop-and-frisk practices of the NYPD under outgoing chief Ray Kelly.

While Bratton led the LAPD, the department’s use of stop and frisk dramatically increased, according to the Daily News. In 2002, cops made 587,200 stops, and by 2008, they made 875,204 stops, an increase of 49 percent, the News said, citing a 2009 report from the Harvard Kennedy School. The majority of those stopped were black or Hispanic, the News said, but the number of stops that led to arrests was far higher than in New York. The NYCLU, which has been highly critical of the NYPD’s use of stop and frisk, said in a statement that it looks forward to working with de Blasio and Bratton “to ensure that fundamental changes are made to the NYPD, including a top-to-bottom culture shift that ends racial profiling and the abuse of stop and frisk.”

The selection of Mr. Bratton, a well-known and generally well-regarded figure in law enforcement, appeared to reflect the tricky spot Mr. de Blasio finds himself in as he moves to reshape the Police Department’s street tactics, while sustaining the decline in serious crime. New York is much changed since Mr. Bratton first took the reins in 1994. Crime rates were much higher and the issue dominated mayoral politics. With his hard-charging, press-friendly style, Mr. Bratton managed to garner considerable acclaim for the drop in crime on his watch, even as crime was falling in many other big cities as well. Now, Mr. Bratton returns to a city where crime has continued to fall and where there is less acceptance of some of the most aggressive and confrontational policing tactics. He and Mr. de Blasio will most likely be judged on whether the city can continue to be kept safe from crime and terrorism while quieting criticism over the excesses of policing, especially in minority communities.

De Blasio is holding a press conference at this writing to formally announce the appointment.