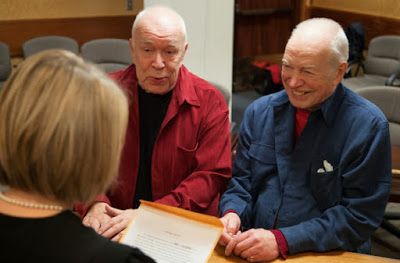 Eric Marcoux and Eugene Woodworth have been together since they the day they met in Chicago in 1953. “I am here today to be legally married to Eugene Woodworth, with whom I have had an intimate deeply committed relationship for a little over sixty years,” Marcoux says. Marcoux is 83 years old and Woodworth is 85. They can’t marry in Oregon, where a constitutional amendment outlaws same-sex marriage. When same-sex marriage was legalized in Washington last year, they didn’t rush across the state line to get married. “No, no, no….” says Woodworth. “We wanted to have it in Oregon,” Marcoux explains.

But Woodworth has been diagnosed with congestive heart failure, and he’s been given weeks to live. They’re getting married today with the hope that Marcoux might be eligible to receive social security benefits as the surviving spouse. “We’ve observed federal government extending privileges. Then it occurred to us, ‘well, maybe we’ll be able to transfer his social security,’ which is significantly greater than mine, to me. And although it’s a modest one, it will make an enormous difference in the kind of life that I will be able to leave – live! – and leave,” Marcoux says. “He deserves it after living with me for sixty years,” Woodworth laughs.

Hit the link for the rest of the story. Take a tissue. (Tipped by JMG reader Homer)