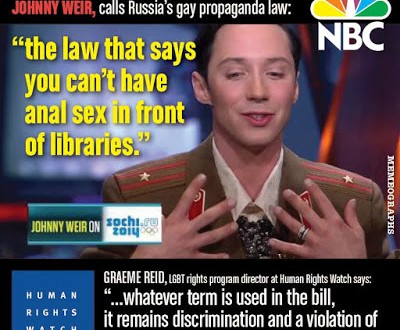 Former Olympic skater Johnny Weir was picketed by Queer Nation outside his talk at Barnard College December 2 for his position that “the Olympics are not the place to make a political statement” about Russia’s anti-gay laws and “you have to respect the culture of a country you are visiting.” During his talk he spoke of “idiots like the ones outside tonight, dumping vodka in the street,” action he dismissed as useless. “They say all these stupid things,” he told the audience of about 40 Barnard women students. “I never supported the [Russian] government. I supported the people.”

The banner outside, made and held by Gilbert Baker, creator of the Rainbow Flag, among others, stated in blood red, “Weir: Russian Olympic Clown; N.B.C.: Naïve Bloody Collaborators.” [snip] “We’re angry at him for not telling the truth about what’s going on in Russia to LGBT Russians and everybody else who dissents, who are being brutalized,” said Ann Northrop of Queer Nation at the protest. “He is selling out millions of people to satisfy his desire not to forgo his income or status. Is this what he would have done in Germany in 1936?”