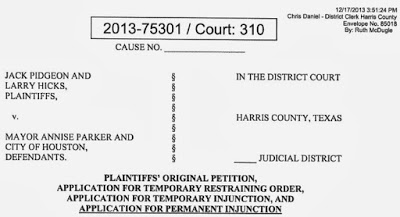 A Texas judge has issued an order suspending spousal benefits for LGBT employees of Houston.

State District Judge Lisa Millard issued the order in response to a lawsuit filed by Harris County GOP Chair Jared Woodfill, on behalf of plaintiffs Jack Pidgeon and Larry Hicks. The order from Millard, a Republican, says the city must stop providing the benefits pending a hearing on Jan. 6. Pidgeon and Hicks, who are Houston taxpayers, brought the suit in response to Mayor Annise Parker’s decision in November to extend benefits to the same-sex spouses of city employees who are legally married in other states. The plaintiffs allege that Parker’s decision violated the Houston city charter, the state Defense of Marriage Act and the Texas Constitution.

A spokesman for Parker has vowed to seek an immediate reversal. So far only three staffers have signed up for the benefits.