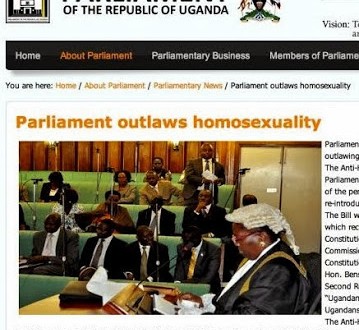 The Anti-Homosexuality Bill, 2009 seeks to establish a comprehensive consolidated legislation to protect the traditional family by prohibiting any form of sexual relations between persons of the same sex; and the promotion or recognition of such sexual relations in public institutions and other places through or with the support of any government entity in Uganda or any other non governmental organization inside or outside the country. The Committee on Legal and Parliamentary Affairs said in its Report, “The Bill aims at strengthening the nation’s capacity to deal with emerging internal and external threats to the traditional heterosexual family.” The Committee also said that there is need to protect the children and youth of Uganda who are vulnerable to sexual abuse and deviations as a result of cultural changes, uncensored information technologies, parentless child development settings and increasing attempts by homosexuals to raise children in homosexual relationships through adoption and foster care. The Anti Homosexuality Bill provides a fourteen year jail term for one convicted for the offence of homosexuality; and imprisonment for life for the offence of aggravated homosexuality.