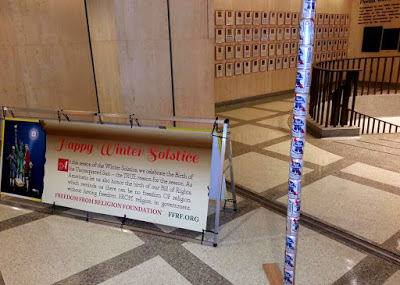 Earlier today I posted a clip of the folks at Fox News freaking out about this. Here’s the report from the Associated Press:

A Festivus pole made of Pabst Blue Ribbon beer cans is on display at the Capitol across the rotunda from a Nativity scene. Chaz Stevens of Deerfield Beach put up his 6-foot-tall pole Wednesday, an act that even he described as ridiculous. But Stevens says he opposes religious displays in government buildings and if the depiction of Jesus’ birth is allowed, so should his Festivus pole. Festivus is a non-secular holiday created in a 1997 episode of “Seinfeld.” Pam Olsen organized the Nativity display. She stopped at the Capitol to see the Festivus pole and told Stevens she welcomes his decision to exercise his right to free speech. She did, however, say a more traditional plain aluminum pole would have been more appropriate rather than Stevens’ beer can version.

The Festivus pole is located next to a winter solstice message from the Freedom From Religion Foundation. A commenter at Breitbart is furious: “I happen to be a great great granddaughter of Capt Frederick Pabst and
he would flip over in his grave if he saw his beer being exploited by a
bunch of atheist punks.”  Photo source. (Tipped by JMG reader Rafael)

Previous Freep This Indian Poll
Next YouTube: What Does 2013 Say?