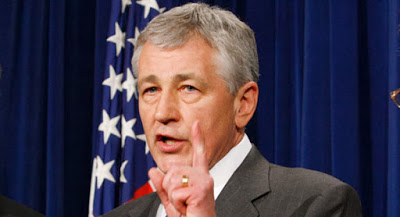 Secretary of Defense Chuck Hagel today declared that National Guard units in all states are now in compliance with his directive that same-sex spouses be allowed to register for military benefits. Here is his full statement.

On October 31, I called on the Chief of the National Guard Bureau to work with several states to fully implement DoD policy by providing DoD ID cards to all eligible military spouses, regardless of sexual orientation. Following consultations between the National Guard Bureau and the Adjutants General of the states, all eligible service members, dependents and retirees – including same-sex spouses – are now able to obtain ID cards in every state. All military spouses and families sacrifice on behalf of our country. They deserve our respect and the benefits they are entitled to under the law. All of DoD is committed to pursuing equal opportunities for all who serve this nation, and I will continue to work to ensure our men and women in uniform as well as their families have full and equal access to the benefits they deserve.

This is a welcome announcement, and one that Secretary Hagel deserves credit for making happen. The resistance on the part of some governors on extending these benefits to same-sex couples was a grossly unfair violation of federal law that turned the promise of equal treatment for all military personnel on its head. The ACLU is pleased to have partnered with the American Military Partner Association on a national petition urging the Department of Defense to ensure that same-sex military couples could not be denied equal access to the federal benefits to which they were entitled.