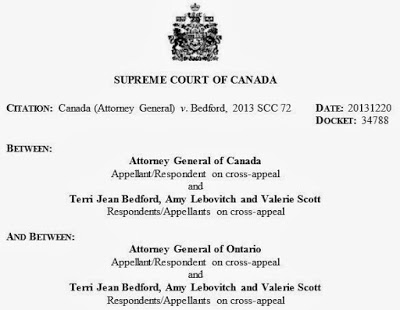 CANADA: Supreme Court Strikes Down Laws Against Prostitution And Brothels

The Canadian Supreme Court today issued a sweeping ruling which declares that laws banning prostitution and brothels are a violation of the federal constitution.

In striking down laws prohibiting brothels, living on the avails of prostitution and communicating in public with clients, the top court ruled Friday that the laws were over-broad and grossly disproportionate. “Parliament has the power to regulate against nuisances, but not at the cost of the health, safety and lives of prostitutes,” wrote Chief Justice Beverley McLachlin in the 9-0 decision that noted “it is not a crime in Canada to sell sex for money.” The ruling was in response to a court challenge by women with experience in the sex trade, Terri-Jean Bedford, Amy Lebovitch and Valerie Scott that had resulted in an Ontario court ruling that overturned the laws. The Ontario Court of Appeal later upheld the law against communicating in public, but sided with the lower court in overturning the provisions against living off the avails and keeping a common bawdy house or brothel.

The Court has stayed their ruling for one year to give Parliament a chance to react.

The ball is now back in the court of Justice Minister Peter MacKay, who needs to decide whether to adopt new prohibitions and if so, how to ensure those prohibitions do not fall afoul of the court. Mr. MacKay suggested in a statement that the government will continue to look at prohibiting prostitution in some fashion. The government is “exploring all possible options to ensure the criminal law continues to address the significant harms that flow from prostitution to communities, those engaged in prostitution, and vulnerable persons,” he said.

You know this was the inevitable result of gay marriage, right? Because that’s what we’re going to hear for the next few days.