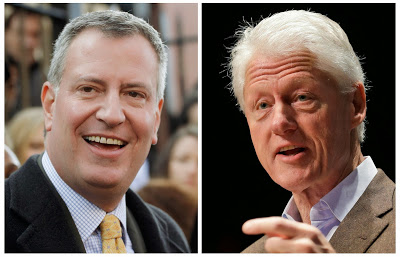 Former President Bill Clinton will swear in Bill de Blasio as New York City’s 109th mayor at the inauguration ceremony on Jan. 1, the mayor-elect’s transition team announced in a statement on Saturday. Mr. de Blasio served in Mr. Clinton’s administration as a regional director of the Department of Housing and Urban Development and was the campaign manager for Hillary Rodham Clinton’s successful run for the Senate in 2000. Mrs. Clinton will also attend the inauguration. “I was honored to serve in President Clinton’s administration and on Secretary Clinton’s campaign for U. S. Senate, and I am honored again that they will both join our celebration for all of New York City,” Mr. de Blasio said in the statement. “Wednesday’s ceremony will be an event for every New Yorker from all five boroughs, and Chirlane and I couldn’t be more excited to have President Clinton and Secretary Clinton stand with us,” he said, referring to his wife, Chirlane McCray.

De Blasio’s camp gave out 1000 free tickets to the inauguration last week. Some of those tickets are now appearing on Craigslist.

Previous Count The Lies
Next More US Hate Exported To Jamaica