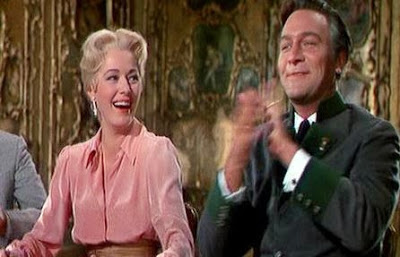 Variety has the obituary:

Oscar-nominated actress Eleanor Parker, best known today for her role as the Baroness, the lady friend of Captain Von Trapp who loses out to Julie Andrews’ Maria in 1966 film “The Sound of Music,” died Monday morning due to complications from pneumonia at a medical facility near Palm Springs, Calif. She was 91.
In the 1950s, however, Parker earned three Oscar nominations for best actress: in 1951, for “Caged,” in which she played a naive young widow made cynical by her experiences in prison; in 1952, for William Wyler’s “Detective Story,” in which she portrayed the wife of a ruthless police detective (Kirk Douglas) who ultimately reveals that she has availed herself of the services of the abortionist he’s intent on imprisoning; and in 1956 for biopic “Interrupted Melody,” in which she portrayed Australian-born opera star Marjorie Lawrence, who battled back from polio.