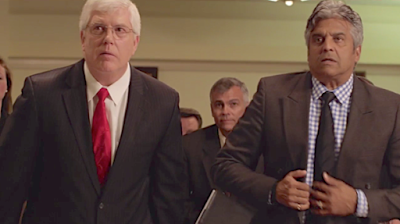 On the heels of Rick Santorum’s flop as a movie mogul, it looks like the professional anti-gay activists over at Liberty Counsel have been bitten by the acting bug and decided to try their hands at filmmaking as well, with the release of a feature film called “Uncommon” starring none other than Erik Estrada. Based on the trailer, the film looks to be exactly as awful as one would expect a movie made by Liberty Counsel to be … especially one that actually features Mat Staver in an acting role.

The Christian conservative legal foundation released the trailer to “Uncommon,” which stars Erik Estrada as a principled janitor who helps the students put together the Bible-based production. The theme is in line with Liberty Counsel’s goal to allow students and school employees to promote religious beliefs in public schools.“Religious liberty in public school is certainly a fitting topic for our first feature film,” said Mat Staver, Liberty Counsel founder and chairman. “Many of the calls Liberty Counsel receives are from parents and students whose speech and religious viewpoints are being censored in the public schools.” According to its IMDB.com page, “Uncommon” will depict students at fictional Rosewood High School as they work to create their own theater, music and dance departments after they are eliminated due to budget cuts. “Struggling to find the right script, music and choreography the students get advice from an uncommon source: the Bible,” writes Daniel Bowden on IMDB. The trailer indicates the film’s climactic scenes will include courtroom scenes featuring Staver arguing on behalf of the students.

RELATED: Last August, Staver was named in a RICO Act suit which alleges that he conspired to kidnap the daughter of Janet Jenkins, a lesbian whose estranged partner went “ex-gay” and vanished to Central America with the child. The child is still missing and a Christian minister was last year found guilty of abetting her abduction.

Previous Russia: Only Italy Can Adopt Our Children Because They Ban Gay Marriage
Next Christian Grifter Paul Crouch Dead At 79