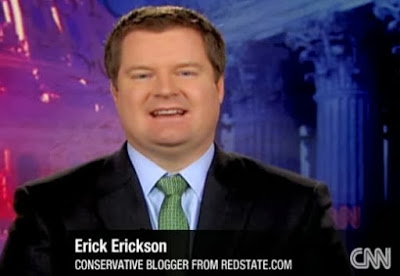 “Jimmy LaSalvia of or formerly of GOProud is on Facebook letting everyone know Ken Cuccinelli is the 2013 equivalent of David Duke. Because two dudes not being able to buy a china pattern together is the same as not being able to vote, being forced to use separate bathrooms, and being attacked by fire hoses and dogs in the streets. His GOProud partner, Chris Barron went on twitter to declare he voted in Virginia for the Democrat, Terry McAuliffe. When I have pointed out before that GOProud really isn’t a part of the Republican coalition, I was met with calls of homophobia. But they have never been a part of the coalition. It’s worth remembering that today the founders of GOProud equate a small government conservative to a Grand Dragon of the KKK because his Christian faith is, in their mind, equivalent to the Klan. It’s also worth pointing out that folks affiliated with this group have routinely assailed conservatives for their purity tests — conservatives who routinely vote in the general election for the Republican; an action they themselves won’t do.” – Erick Erickson, writing for Red State.

Previous History In The Illinois House
Next Today’s NYC Tabloids