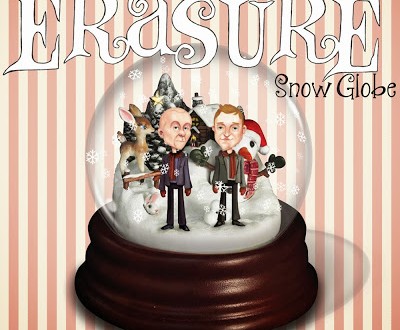 Courtesy of the Karpel Group, today’s Swag Tuesday prize is Snow Globe, the new holiday album from Erasure which is on sale today online and at physical retailers nationwide.

Enter to win Snow Globe from Erasure! Snow Globe – the stunning holiday album from the beloved English duo, Erasure. Produced by Erasure, Gareth Jones and Richard X, Snow Globe is a collection of original compositions and seasonal classics. The first single, “Gaudete,” is Erasure’s take on the traditional Latin carol, which will be recognizable by many after Steeleye Span’s version in the early 70s. Amazon review: Snow Globe is a combination of original Erasure songs and Christmas cover songs. Unlike the bells and whistles, glitter and tinsel sets that crowd the market come Christmas-time, Snow Globe is possessed of something more in the wistfully, strangely subdued celebratory mould of recent seasonal albums by Tracey Thorn and Kate Bush.

We have three copies of Snow Globe to give away. Enter to win by commenting on this post and please remember to leave an email address in the text of your comment. Entries close at midnight on Thursday, west coast time. Publicists: If you’d like to take part in Swag Tuesday on JMG, please email me.

Previous Macklemore: Join The ACLU
Next Freep This AFA Poll