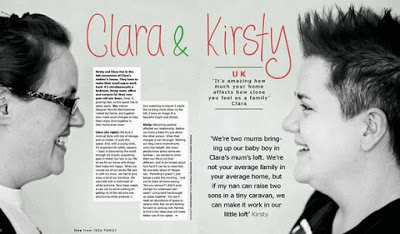 RUSSIA: Ikea Cuts Story About Lesbian Couple From Its Magazine

Saying that they fear breaking the law on “homosexual propaganda,” Ikea has removed a story about a lesbian couple from the Russian version of its magazine.

An IKEA spokeswoman said the move was made in accordance with laws in Russia banning “propaganda of nontraditional sexual relations.” The company replaced the article in Russia with a story about a designer living in China. The “IKEA Family Live” magazine is sent to customer club members living in 25 different countries, but is designed to meet language requirements and other norms in the individual markets where it is distributed. “One of the conditions we have of running our business is that we have to follow the law in the markets where we operate,” IKEA spokeswoman Ylva Magnusson said in an interview Thursday. Russia is IKEA’s fifth best-selling country, representing 6% of overall sales. IKEA has 14 stores and about 11,000 employees in the country.

Ikea says they only took the move after consulting Russian lawyers. “We have two guiding principles in the communication we distribute from Ikea. The first is home interior design. The second is following the law.” (Tipped by JMG reader Duncan)