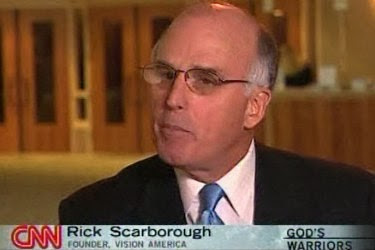 Rick Scarborough: ENDA Will Force Christians To Deny Their Christianity

“If the bill becomes law, Christians will be forced to violate their conscience or violate ENDA. While ENDA supposedly contains an
exemption for churches and other religious institutions, there is none
for individuals with sincerely held religious beliefs. This law is about forcing Bible-believing Christians to deny
their faith rather than inconvenience cross-dressing, gender-confused
adults.  How do you know if someone is
engaged in homosexual behavior unless they tell you so? ENDA would
force Christians, Orthodox Jews and other people of faith to employ
those who flaunt their ‘sexuality’ in the work place.” – Tea Party Unity head Rick Scarborough, who became a national laughingstock last month when he announced that Christians should file a class action lawsuit against homosexuality itself.