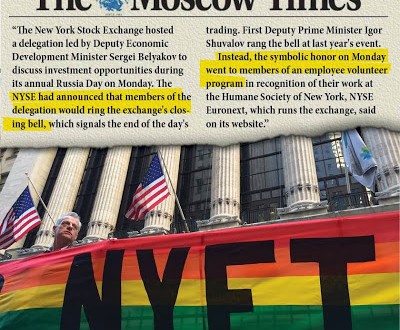 More from the Moscow Times:

During last year’s event, the Russian flag was raised on the NYSE building together with a banner announcing “2012 NYSE Russia Day.” Amid this year’s protests against the Russian law, neither the flag nor any other sign commemorating Russia appeared outside the NYSE building. “Apparently, the NYSE is embarrassed by their association with the Russian government,” said Duncan Osborne, an activist with the Queer Nation gay rights group, in an interview. By Monday, gay rights activists had gathered nearly 10,000 signatures for a petition urging the NYSE to cancel its Russia Day altogether to protest the law, which was adopted in June and has been blamed by opponents for a recent flurry of attacks against Russian gays. “Russia’s abusive treatment of its LGBT citizens is grimly illustrated by accounts of gay youth being kidnapped, tortured and raped by … gangs whose activities the Russian government allows to to flourish and even actively encourages,” said the petition posted on the Change.org website.