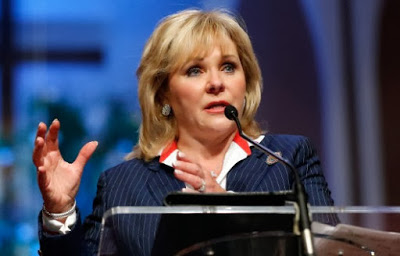 GOP Oklahoma Gov. Mary Fallin today announced that ALL married couples, including straight ones, will be denied marriage benefits at the state’s National Guard bases. Last month Fallin threatened to sue the federal government rather than comply with the edict handed down by Defense Secretary Chuck Hagel.

In announcing the decision, Fallin said “Oklahoma law is clear. The state of Oklahoma does not recognize same-sex marriages, nor does it confer marriage benefits to same-sex couples. The decision reached today allows the National Guard to obey Oklahoma law without violating federal rules or policies. It protects the integrity of our state constitution and sends a message to the federal government that they cannot simply ignore our laws or the will of the people.” But Hagel has said he will fight the battle to provide equal access to all National Guard families, regardless of sexual orientation. “All spouses of service members are entitled to DoD ID cards, and the benefits that come with them,” Hagel said last month. “But several states today are refusing to issue these IDs to same-sex spouses at National Guard facilities. Not only does this violate the states’ obligations under federal law, but their actions have created hardship and inequality by forcing couples to travel long distances to federal military bases to obtain the ID cards they’re entitled to.”

Couples who already have their ID cards will continue to be allowed to access benefits. All future applicants, gay and straight, must now travel to a federal facility to get those cards.