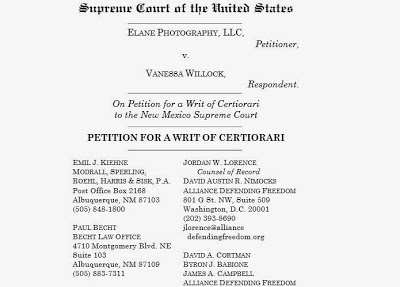 The anti-gay Alliance Defending Freedom today petitioned the US Supreme Court to hear the appeal of New Mexico’s Elane Photography, the most-cited case in the boogeyman war against same-sex marriage despite the fact that New Mexico does not presently have legalized same-sex marriage. Via SCOTUSblog:

On the premise that taking photos is a form of story-telling — recall the old idea about how many words a picture is worth — an Albuquerque studio on Friday asked the Supreme Court to protect its owners from having to send the message that the uniting of same-sex couples in marriage-like ceremonies is acceptable. The new case of Elane Photography v. Willock does not ask the Court to rule on any right of gays and lesbians to marry, but it does seek a decision on how far a state may go to protect same-sex couples from discrimination in the marketplace. The New Mexico Supreme Court ruled in August that the studio violated a state anti-discrimination law by turning away a request to take photos of a same-sex commitment ceremony. As more legislatures — including Congress — pass or at least consider bills to outlaw discrimination against homosexuals, the spread of marriage or civil unions among gays and lesbians is now raising more issues about how those laws apply to such relationships. The Elane Photography case could help provide an answer.