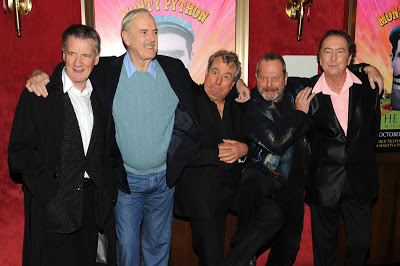 The details so far:

The five surviving members of Monty Python are reuniting for a stage show. The five — John Cleese, Terry Gilliam, Eric Idle, Terry Jones and Michael Palin — will announce their specific plans Thursday at a press conference in London, where the hit comedy TV series “Monty Python’s Flying Circus” debuted in 1969. Idle, the man behind the hit Broadway musical “Monty Python’s Spamalot” (which also played at the San Diego Civic Theatre), tweeted: “Only three days to go till the Python press conference. Make sure Python fans are alerted to the big forthcoming news event.”

Perhaps like many of you, I went through high school shrieking in a mock-British accent. Our favorite bits were the parrot sketch (of course) and the argument clinic. Excuse me, but I’ve already paid.