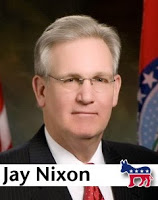 Surprising and welcome news out of Missouri.

Gov. Jay Nixon said Thursday that he supports legalizing gay marriage in Missouri during a news conference announcing that homosexual couples married under the laws of other states would be allowed to file combined state tax returns. In an executive order, Nixon directed the Department of Revenue to accept the combined returns as a reaction to the June ruling from the U.S. Supreme Court striking down the federal Defense of Marriage Act. That law barred same sex couples who were legally married from receiving any marriage-based federal benefits, such as tax exemptions and Social Security payments. Under state law, couples who file a joint federal return are required to file a combined state tax return. The executive order clarifies that the law applies to all couples, Nixon said.

Nixon: “Many Missourians, including myself, are thinking about these issues of equality in new ways and reflecting on what constitutes discrimination. For me, that process has led to the belief that we shouldn’t treat folks differently because of who they are.”

RELATED: Missouri passed a constitutional ban on same-sex marriage in 2004. A total of 21 states passed such bans from 2004-2006 when Ken Mehlman headed the RNC.