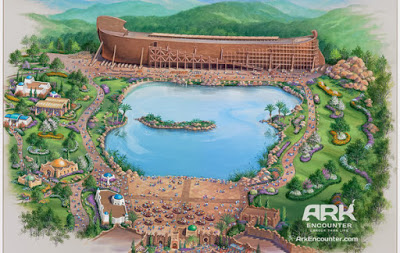 Bloomberg takes a dim view of the plan:

Given the default history of unrated municipal debt, investors may have to pray for the success of bonds being sold to build a full-scale replica of Noah’s Ark. The northern Kentucky city of Williamstown plans to offer $62 million of securities next month for affiliates of Answers in Genesis, a Christian nonprofit that operates the Creation Museum upstate. Proceeds will help build a 510-foot (155.4-meter) wooden ship, the centerpiece of a planned biblical theme park called “Ark Encounter.” Bond documents project the venue will attract at least 1.2 million people in its first year. Investors who buy $100,000 of the taxable securities will get a lifetime family pass, bond documents show. Yet they may not get their money back, given the track record of unrated munis. Of the 438 issuers currently in default, 93 percent initially offered bonds without a credit grade, according to Concord, Massachusetts-based Municipal Market Advisors.

Americans United for Separation of Church and State are predictably annoyed.

Alex Luchenitser, associate legal director at Americans United, told The Christian Post that the bond offering is one of many examples of government aid proposed for the Ark Encounter project. “The imminent bond offering is only one of several different kinds of aid being given to the Ark Park by the State of Kentucky, Grant County, and the City of Williamstown,” said Luchenitser. “The array of government aid to the Ark Park raises very serious issues under the religion clauses of the U.S. Constitution and the even stricter church-state prohibitions of the Kentucky Constitution.”

The organizers respond: “We believe it would, in fact, be illegal and unethical for a governmental agency to engage in viewpoint or religious discrimination against the Ark Encounter LLC simply because the content of this theme park happens to focus on biblical history.”