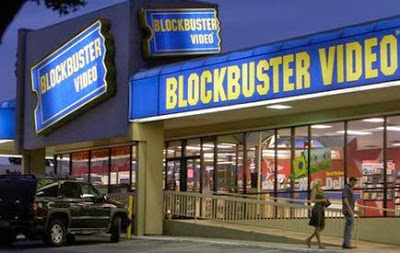 As CNN puts it, your Blockbuster late fees are now waived.

On Wednesday, DISH Network, which purchased Blockbuster in 2011, announced it was closing the chain’s 300 remaining U.S.-based retail stores, as well as its distribution centers. “Consumer demand is clearly moving to digital distribution of video entertainment,” said DISH president and CEO Joseph P. Clayton in the press release about the closures. His statement echoes many from recent years about the migration of entertainment from physical objects — CDs, DVDs, books, games — to bits, bytes and pixels available on various screens and portable devices. The action was long expected. Blockbuster had been closing stores for years, as is obvious from the yawning vacancies still present in many of those very same strip malls. The chain was done in by Netflix, streaming video and a world of Internet options.

My headline is from the NYT story, which notes that Blockbuster had 9000 stores just ten years ago.