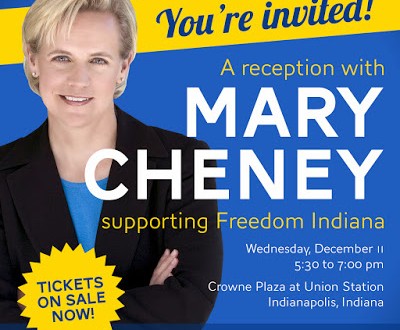 Mary Cheney will help Freedom Indiana raise money to fight that state’s proposed constitutional ban on same-sex marriage. From Cheney’s message that accompanies the above image:

“Speaking out against HJR-6 isn’t a matter of politics. It’s about family. It’s about everyone feeling welcome in the state they call home. There’s nothing I wouldn’t do to protect my wife Heather and our two children. And then I think about the thousands of same-sex couples and their families in Indiana who would be directly impacted by HJR-6, I’m committed to standing together and working across party lines to keep this amendment out of Indiana’s constitution. Freedom Indiana’s campaign is strong. And as the start of the legislative session quickly approaches, we can make it even stronger by pitching in to support the grassroots work across the state. Join me in Indianapolis on Wednesday, December 11th as we raise crucial funds and resources to protect Indiana’s constitution. Click here to get your ticket now. Thanks for everything you’re doing to stop HJR-6. See you soon, Mary Cheney.”

Mary Cheney infamously stayed silent in 2004 when the Bush/Cheney administration pushed for the Federal Marriage Amendment. And as Dan Savage eloquently noted last week, “Mary wrote that fucker a check” when Mitt Romney did the same thing last year. Can anybody recall if Mary Cheney has ever previously campaigned for the rights of her people? This might be a first, thanks, no doubt, to her sister Liz. (Tipped by JMG reader Charles)

Previous Caramel Vs Popcorn
Next Freep This TIME Magazine Poll