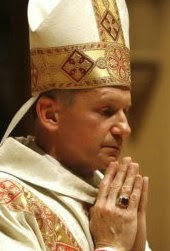 Next Wednesday, Illinois Gov. Pat Quinn will sign the marriage equality bill in a ceremony at the state capitol. At the same time, also in Springfield, Catholic Bishop Thomas Paprocki plans to hold a prayer of exorcism to rid the state of all those happy, dancing, homosexual demons. Seriously.

Bishop Thomas John Paprocki will offer “Prayers of Supplication and Exorcism in Reparation for the Sin of Same-Sex Marriage” at the Cathedral of the Immaculate Conception, Sixth and Lawrence streets in Springfield, on Wednesday, Nov. 20, from 4 to 5 p.m. Clergy, religious and laity are invited to attend. “The context for this prayer service may be understood by recalling the words of Pope Francis when he faced a similar situation as Archbishop of Buenos Aires in 2010,” Bishop Paprocki said. Bishop Paprocki noted, “The pope’s reference to the ‘father of lies’ comes from the Gospel of John (8:44), where Jesus refers to the devil as ‘a liar and the father of lies.’ So Pope Francis is saying that same-sex ‘marriage’ comes from the devil and should be condemned as such.

More about the ceremony:

The prayers for “Supplication and Exorcism Which May Be Used in Particular Circumstances of the Church” are taken from the Appendices to the 2004 Latin edition of the Rite of Exorcism, the introduction to which explains, “The presence of the Devil and other demons appears and exists not only in the tempting or tormenting of persons, but also in the penetration of things and places in a certain manner by their activity, and in various forms of opposition to and persecution of the church. If the diocesan bishop, in particular situations, judges it appropriate to announce gatherings of the faithful for prayer, under the leadership and direction of a priest, elements for arranging a rite of supplication may be taken from [the texts provided in these appendices].” Bishop Paprocki said that since same-sex marriage is contrary to the plan of God (see Genesis 1:27 and 2:24, Matthew 19:4-6 and Mark 10:6-9), those who contract civil same-sex marriage are culpable of serious sin. He also noted that politicians who enacted civil same-sex marriage legislation are “morally complicit as co-operators in facilitating this grave sin.”

O-M-JEEBUS, somebody PLEASE bring a truckload of Sisters in for that exorcism!

PREVIOUSLY ON JMG:  In September 2012, Paprocki told his diocese that if they vote for a Democrat, Satan will take their soul. In January of this year, Paprocki testified against same-sex marriage before the Illinois legislature. Paprocki then ordered all of the priests in his parish to read an anti-gay letter to their congregations.  Also in January of this year, Paprocki defended a priest in his diocese who was forced to call 911 to get him out of the handcuffs and ball-gag that he’d put on during some totally-not-gay self-pleasuring. According to Paprocki, the priest was merely engaging in “non-sexual self-bondage” as a means of relieving stress. Uh-HUH. Just for fun, here’s that 911 call one more time. Listen to the priest try to mumble directions through the ball-gag.