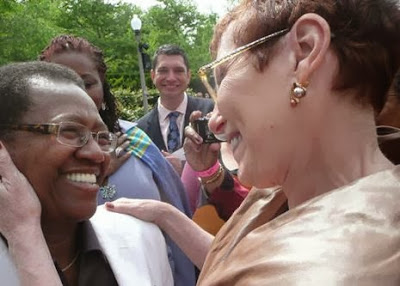 An Illinois judge has ruled that a terminally ill lesbian may marry her partner before the same-sex marriage law goes into effect next summer.

County Clerk David Orr said he will comply with the court’s order, handed down Monday by Judge Thomas Durkin. A lawsuit was filed Friday by Lambda Legal and the ACLU of Illinois seeking immediate action for Vernita Gray and Patricia Ewert. Gray has bone and brain cancer and is not expected to live until Illinois’ gay marriage law goes into effect June 1. Camilla Taylor of the gay rights group Lambda Legal says Gray wishes to marry the woman she loves before she dies. Orr says his office will expedite a marriage license to Gray and Taylor, adding it’s a service already granted to heterosexual couples in similar situations.