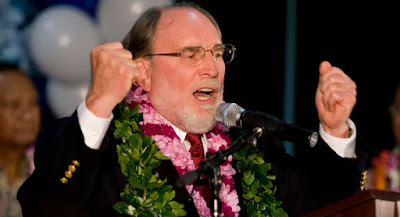 Hawaii Gov. Neil Abercrombie is expected to sign a bill Wednesday legalizing gay marriage, expanding the state’s aloha spirit and positioning the islands for more newlywed tourists. Abercrombie was expected to sign the bill Wednesday morning at an invitation-only ceremony at the Hawaii Convention Center, near the tourist heart of Waikiki. The measure will allow thousands of gay couples living in Hawaii and even more tourists to marry in the state starting Dec. 2. Another 14 states and the District of Columbia already allow same-sex marriage, while a bill is awaiting the governor’s signature in Illinois. “I look forward to signing this significant piece of legislation, which provides marriage equity and fully recognizes and protects religious freedoms,” Abercrombie said.

I’ll post a video link to the ceremony this afternoon.