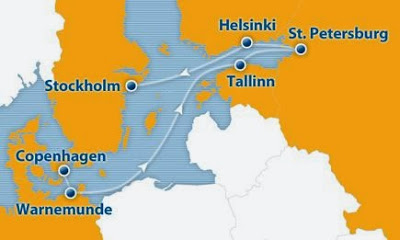 Tuesday night, Atlantis CEO Rich Campbell outlined the new cruises in store for 2014, including the return of the popular Baltic European cruise. This time, however, one port of call that had always been included in the past was pointedly excluded for the 2014 cruise: St. Petersburg, Russia. Campbell said that while the people of St. Petersburg were always friendly and welcoming to us in the past, and that the immense cultural attractions made it an obvious port of call under normal circumstances for any Baltic cruise … these were no longer normal circumstances. The hostile anti-gay attitude of the current Putin regime has made Russia an unacceptable destination for a gay cruise, and he expressed hope that the economic effect of the decision would in some small way help to bring about change in the current sad state of affairs there. The crowd of veteran Atlantis cruisers at the reception responded to the announcement with cheers and applause.

Good for them. But a check of the upcoming Caribbean cruise by Atlantis Events reveals that they will be making a port call in Barbados, where homosexuality is technically punishable by life in prison, although Wikipedia notes that the law is “rarely enforced.” The Caribbean cruise will also stop in St. Lucia, where homosexual acts between males are punishable by ten years in prison. At least in Russia homosexuality itself is not illegal. Yet.