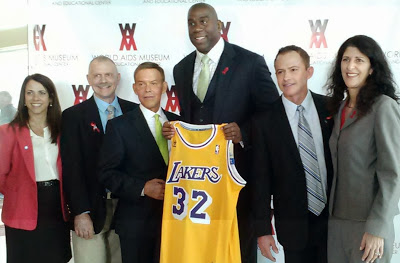 The dedication for the World AIDS Museum took place in the Fort Lauderdale suburb of Wilton Manors yesterday. Father Tony Adams took the above photo and he sends us this email:

I just went to the dedication of the fledgling World AIDS Museum in Wilton Manors. Magic Johnson was the special guest. He donated a jersey. He said that today is the 22nd anniversary of his coming out as HIV+. Steve Stagon, the founder, said that the museum will increase awareness and decrease the stigma of HIV/AIDS. A board member who came out as gay to his parents and got tested for HIV said that Magic Johnson inspired him to do it. He also made the point that the 9/11 museum honors the 3000 who died because of the attack, and the Holocaust museum honors the 6 million who died because of the Holocaust, but there have been 26 million deaths worldwide because of HIV/AIDS. There is much justification for this museum. This museum will have an education center to provide treatment and prevention information.

You can donate to support the museum here.