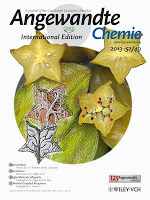 European researchers have used a computer to design small synthetic molecules capable of attacking the deadly AIDS virus where it hurts the most: its ability to produce the genetic material required for replication. It’s the first time in history this has ever been done. The novel designer molecules work by blocking the virus’ ability to replicate. And they do so by inhibiting the output of genetic material from the infected cell nucleus to the cytoplasm. Without replication, no new infections can occur. So in theory, because all cells are mortal, even the infected cells will eventually wither away and die. Normally, the replicative genetic material of the AIDS virus, or HIV-1, is formed by ribonucleic acid (RNA). This critical genetic material encodes for special proteins that allow it to penetrate human cells and then reproduce within them. But the new designer compound, a virus inhibitor called terphenyls, reproduces the interactions of one of the proteins encoded by the virus — a viral protein called Rev.