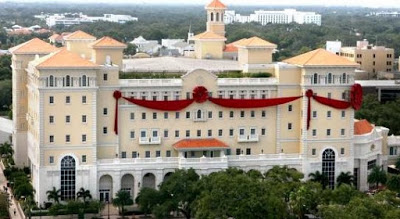 After 15 years of construction, the Church of Scientology has dedicated a massive new headquarters building in St. Petersburg, Florida. The upper floors of the building will be devoted to unleashing the dozens of superpowers that we all apparently possess.

“Super Power,” first unveiled by Scientology founder L. Ron Hubbard, is one’s ability to hone in on 57 senses called “perceptics.” The original five senses — sight, hearing, taste, smell and touch — were found not enough. The Flag Building, nicknamed the “Super Power” building, will specifically feature exclusive programs on expanding one’s “perceptics.” Among its generally secretive program’s features is an antigravity simulator, various exercise machines, and a gyroscope-like apparatus that spins blindfolded riders around, a scientologist previously told the Tampa Bay Times after attending similar courses in Los Angeles. The spinning contraption is said to improve perception of compass direction, one of the 57 “perceptics.” Some of the other “perceptics” the programs aim to help members master are personal size, blood circulation, fields/magnetic, sound direction, emotional state of groups, and perception of conclusions (past and present).

One of those 57 superpowers has got to be creating an illusion of heterosexuality.