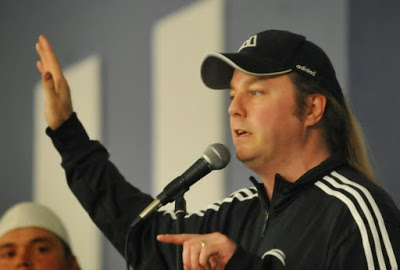 “The question I have for you is, where do these people belong? Well, if you look at prison, everyone is treated equally. If you look at prison, they get free food. If you look to the prisons, they get free medical health care. Wen you look to prisons, you see the only ones who have guns are the police and the guards. Isn’t that what they want? If that’s what they want then let’s send them to jail because that’s where they belong. Because it’s communism. If it was constitutional and it was lawful, then why do we have prisons?” – Hate group crackpot Bradlee Dean, who will be speaking at Larry Klayman’s rally to overthrow the federal government. You’d think Dean would still be pissed at Klayman, who represented him in his losing libel lawsuit against Rachel Maddow.