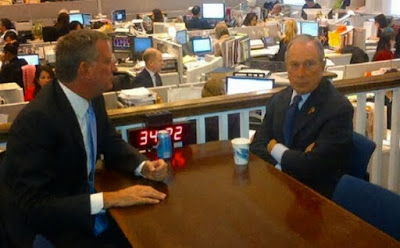 The people of New York pulled a fast one on Mayor Bloomberg last night, defying Dear Leader and electing his supposedly “racist,” “class warfare”-waging arch-enemy to replace him. So it should come as no surprise that Bill de Blasio got a very grumpy-looking Bloomberg this morning when the two sat down for some special post-election bonding time at City Hall. De Blasio reportedly told the press that the mayor had given him some “good advice,” and that being at City Hall as the mayoral-elect was a “special feeling,” though from the looks of things, Bloomberg was brewing his own “special” brand of good old fashioned rancor.